Blackbird Pond is one of the few remaining natural freshwater wetlands in the area. This wetland has expanded greatly over the last year (2011), effectively closing 25-30% of our trails. The height of the pond is dependent on the level of the under-lying aquifer.

The two tallest plants you will see growing at the edges of the pond are Cattails and Bull Rushes (tules). Cattails made an excellent food source for Native Americans; they used all parts of the plants for food, except the stalks which were used for matting, houses, and boats. Bull Rushes also had multiple uses for boats, houses, grain storage containers, and matting. Bull Rush and Cattails also provide waterfowl and other wildlife with food, nesting sites, and concealment. Duckweed is found floating on the surface of the pond. It is a pale green plant that forms as a frond, which when plentiful forms a mat on the surface. Duckweed is very beneficial in that it quickly uses up nitrogen and phosphates (common pollutants) and cleans the water. It also provides food for fish, other small animals and especially ducks. Growing along the edges you will also see Yerba Mansa (Anemopsis), a low growing plant that grows long runners and produces striking white conical flowers with stems that turn bright red in the fall. 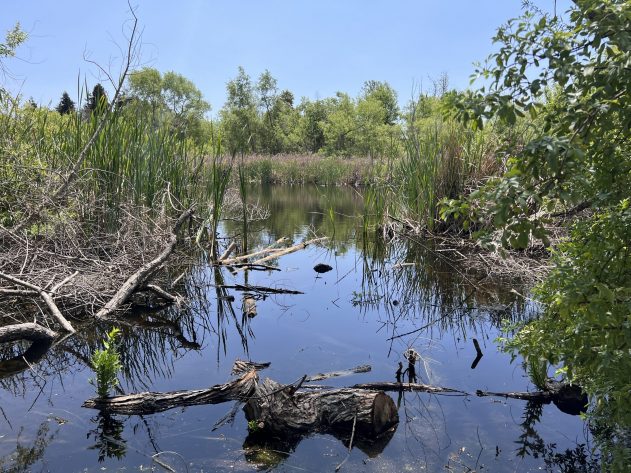 Blackbird Pond is full of life. You can see turtles sunning themselves. These are the Western Pond Turtle and the Painted Turtle. Crayfish also inhabit the pond and provide food for the birds. You will see an abundance of Dragonflies and the smaller Damselflies flying over the pond. The Dragonfly is a good predator consuming vast numbers of mosquitoes. There are small fish to be seen in the water, these are mosquito fish which consume mosquito larvae.

Many birds find refuge, nesting sites and places to rest at the pond. On any day you can see Mallard Ducks, Egrets, Great Blue Herons and also, the Black Phoebe and the Red- winged Blackbird. The Red-winged Blackbird is the symbol of Shipley Nature Center.